The production and trading of counterfeit medicines - fake medicines that pass themselves off as real, authorised medicines - has become a growing, worldwide, illegal business that poses a major health threat to unsuspecting patients.

Following the publication of the Falsified Medicines Directive (FMD) 2011/62/EU by the European Commission on 1 July 2011, nobody should be surprised that there are differing proposals within a range of perspectives for addressing the problem of counterfeit medicines at the European level.

Industry has its own priorities, and has the resources to put its message across, for example regarding the European Stakeholder Model (ESM), currently under development by pharmaceutical supply-chain stakeholders.

For their part, the Council of Europe (CoE) and its European Directorate for the Quality of Medicines & HealthCare (EDQM) have been working for years to enhance international co-ordination and  cooperation in order to ensure that anti-counterfeiting strategies are more effective and remain patientfocussed; a fact that is acknowledged in the preamble to the FMD.

This is why the EDQM started the eTACT project in mid-2009 as part of the CoE's anti-counterfeiting strategy. The project aims to develop a harmonised, standardised and centralised traceability and mass-serialisation system that can be used by authorities and all stakeholders - not just manufacturers, suppliers, distributors and pharmacists, but also patients - whatever the distribution route, including legitimate internet sales. The scope covers all medicines in the legal supply-chain and it will be open to the 36 member states of the European Pharmacopoeia Convention and beyond. 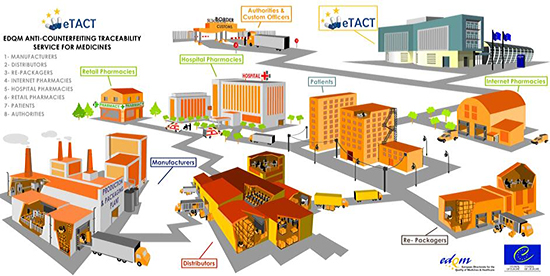 At its current stage of development, eTACT consists of a live demonstration IT system, with inherent flexibility designed to achieve interoperability between existing and future national systems. It was customised at an early stage to the needs of stakeholders, and is likely to evolve further as consultations with them continue regarding their technical needs, expectations and business constraints.

The lab-scale live demo integrates alert functionalities for the detection and prevention of realistic counterfeiting cases along the entire pharmaceutical supply-chain to the patient level. It has been fully tested, including against real-life scenarios, and a scalability study has been run looking at various technical options such as a licensing model for software.

Allowing patients to verify the authenticity of their medication is a unique feature of the EDQM's project that will significantly contribute to strengthening the public's confidence in the legal supply chain. Access for patients will be focussed on verification and, given that their credentials will not be checked for privacy reasons, they will receive a level of information appropriate to their needs.

With inter-operability in mind, the main standards followed by the eTACT demo - in common with other proposed solutions of a lesser scope - are those from GS1, the international non-profit association dedicated to improving the efficiency and visibility of supply-chains: GTIN (Global Trade Item Number) for product numbering, sGTIN (serialised GTIN) plus batch number plus expiry date for item numbering, and the EPCIS (Electronic Product Code Information Services) for interfacing systems.

At this stage, none of the medicine verification options under development has worked through the details of interfacing a pan-European system with national or regional systems. However, while ensuring basic compliance with the FMD, the eTACT system has the inherent flexibility to interface with national verification systems, but also retains the capacity to be scaled-up to meet levels of traceability yet to be defined in the delegated acts to the FMD and other upcoming European requirements, within and beyond the EU.

The flexibility given by the publicly available standards used by the EDQM will allow for additional verification throughout the supply-chain, should the users so wish. This is why the eTACT system covers aggregation, offering coding and serialisation at secondary packaging level, including bundles, cases and pallets. This functionality covers the need to reinforce the legal supply-chain at its weakest points, as shown by the occurrences of counterfeiting cases in the legal supply-chain in recent years. It is also in accordance with the FMD requirement for wholesalers to be able to verify medicines using a serialisation system. However, when eTACT is up-scaled, this functionality would be designed so as to ensure a proper balance between the benefits of increased traceability checks and additional operating costs. The EDQM is aware of the added complexity linked with handling aggregation and will ensure that the specific business constraints of aggregation will be strongly considered when designing the future up-scaled service. This has already been done for re-packagers, with several technical options available in the demo eTACT service covering the various use scenarios for repackaging operations.

The eTACT system will rely on a central EDQM data repository, supported by decentralised repositories among the manufacturers or with national bodies in an information-sharing model. Existing national systems will remain in place. As a trusted public body, the EDQM is ideally placed to deliver public governance of the system in co-ordination with regulatory authorities and to prevent the misuse of data (e.g. commercial data or information to patients on products).

Given the current stage of development of the various proposed solutions to implement the requirements of the FMD in Europe, all of which ultimately aim to be practical and cost-effective, it is premature to make definitive statements on their relative merits regarding applicability and costing, which will become clearer as each project reaches its final stages.

For example, the operational costs of Turkey's fully operating track-and-trace system, the ITS, has been limited to less than €0.01 per box, significantly below the current projected cost per box of the EMS solution. Given the scope of the ITS, which is a full track-and-trace system, the EDQM is confident that the costs of eTACT will be even lower.

The delegated acts provided for by the FMD are expected to be published in 2014, with a further three years before a possible deadline is in place for implementing systems that comply with the Directive.

The EDQM aims to be ready with a fully-tested, fully-costed system before that deadline.