The 8th European API Conference in Berlin - A Review

The annual APIC/CEFIC European Conference on APIs is the leading event for European Regulatory- and GMP API professionals. This year the conference was held for the 8th time, this time in Germany's capital Berlin from 12 to 14 October.

There were more than 200 participants from 25 countries all over the world. As in previous years, the conference was divided into a GMP- and a Regulatory Affairs part in order to take the increased attention for API-related pharmaceutical registration matters into account.

As mentioned in the conference flyer, there indeed probably has never been a better moment in time for an API Conference than October 2005. The regulatory systems in the EU and in the US are about to go through important changes. In the EU a major API milestone will be reached on 30 October 2005. This date is the deadline for the EU Member States to finalise the transposition of the amendments of the EU Directives 2001/83/EC and 2001/82/EC into national law. From this date on APIs for the manufacture of both human- and veterinary medicinal products have to comply with cGMP for APIs as defined in the ICH/Q7A Guideline that has recently been included as Part II into the EU GMP Guide.

In the meantime major progress has been made in the USA towards implementation of the elements of FDA's 21st Century Initiative.

Many of the topics presented and discussed during the 8th CEFIC/APIC Conference related to these changing regulatory realities in the EU and the USA.

A total of 21 speakers from the European- and US authorities - including speakers from the European Commission, EMEA, EDQM, RIVM, BfArM, FDA - as well as from leading European- and US pharmaceutical and API companies presented and discussed the latest developments. This year special attention was also given to the increasingly worrying situation for API manufacturers in Europe where over the past decade a dramatic shift towards imports of APIs from especially Asia has taken place.

Matt Moran, President of the APIC, opened the conference with a talk about the history of API regulations in the EU and the implications for the market. He emphasized that the playing field for the API industry is increasingly tilted against the European API industry to the advantage of Asian competitors, partly due to differences in levels and costs related to regulatory- and GMP compliance. Meanwhile over 70% of APIs used in medicines in Europe are imported from India and China compared to approximately 10% in the early 80s. The lack of oversight over API manufacture and -trading through inspection and enforcement by EU authorities implies a risk for European patients' safety in the form of sub-standard, potentially dangerous APIs. This is the reason why APIC has joined forces with the newly established European Fine Chemicals Group (EFCG) to defend the competitiveness of the European API sector, as vividly presented by Guy Villax, CEO of API manufacturer Hovione SA, Portugal and Chairman of the Pharmaceutical Business Committee of EFCG.

Mrs Sabine Atzor from the European Commission's DG Enterprise and Industry, Brussels, gave a comprehensive insight into the new pharmaceutical legislation and its subsequent implementation. As GMP audits by dosage form manufacturers are a major tool for evaluating the GMP compliance status of an API manufacturer or distributor, an important aspect highlighted by Mrs Atzor was - provided that certain conditions will be met - the acceptability to the authorities of third party GMP audits of API manufacturers. This is important news in relation to the standardized third party audit programme that APIC has developed: the 'APIC Audit Programme', aimed at relieving the industry from excessive audit burdens. The details of the APIC Audit Programme were presented and discussed during one of the parallel sessions of the conference.

While on the one hand the direction into which regulatory change is taking place in the EU is in part different from the US, at the same time there is a strong drive for harmonisation between the two systems. It was encouraging to see during the conference how renewed efforts have recently been started to aim for more alignment between the two areas. 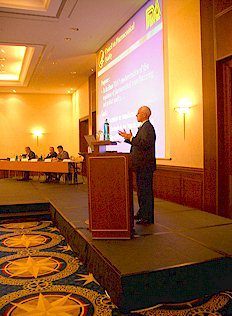 Dr. Nicholas Buhay, CDER/FDA, gave a comprehensive insight into the highly ambitious and challenging 21st Century Initiative from the FDA's point of view, while Dr. Gerald Migliaccio, Vice President - Global Quality Operations at Pfizer / US, discussed the new regulatory paradigm from industry's point of view. An important objective of the new US regulatory system is to take away unnecessary regulatory barriers to the upgrading of pharmaceutical – including API – manufacture towards modern industry standards, while at the same time protecting the health and safety of the patient event better than before. One of the central mottos of the new FDA paradigm is 'to put change back into the hands of industry'; with the important footnote that this will apply only to manufacturers who can prove that they are capable of fully controlling their manufacturing- and other changes in an appropriate, responsible manner. For those companies it should come down largely to having to file less regulatory submissions (supplements) while being subject to risk-based and focused inspections while GMP requirements of course continue to apply fully. Dr. Moheb Nasr, Director of the Office of New Drug Chemistry, Office of Pharmaceutical Science, CDER/FDA explained how the new regulatory paradigm is being put into place and how new thinking and new ways of communicating will be required both from FDA and from industry.

Particularly regarding the way of handling the filing and authorisation of manufacturing- and other changes, the EU has been drifting into the opposite direction with Variation Regulations even having been qualified by the API industry as being 'draconian'. Still these revised Regulations that were implemented in 2003 are seen as one of the major reasons for inhibiting improvement and innovation in API manufacture.

In this context it was welcomed by the API industry that the EMEA/QWP's current view on Variation No 15 ('Submission of a new or updated CEP'), as presented by its vice-chair Dr. Susanne Keitel, includes the exclusion of residual solvents from the scope of its 'Condition 2': Changes in residual solvent levels on CEPs - provided these remain within ICH/Q3C limits - should therefore lead to Variations Type I only.

Mrs Diana van Riet-Nales of the RIVM gave an insight into how Dutch authorities handle Variations with special focus on ASMF amendments.

Another point of major concern for the API industry was also extensively highlighted: With Directive 2001/83/EC as amended coming into force, the responsibility for using GMP compliant APIs for the manufacture of medicinal products for both, human- and veterinary use, rests on the shoulders of the dosage form manufacturers. API inspections by the competent authorities will only be considered when there are grounds for suspecting serious non-compliance with the GMP guidelines or on request of the manufacturer. This situation differs strongly from that in the US, where FDA performs worldwide inspections of pharmaceutical- and API manufacturers on a regular, routine basis.

Another reason why improvement and innovation at compliant API manufacturers are being blocked is the existence of great differences between the regulatory requirements in each region of the world. This lack of harmonisation forms an extreme burden for the API industry in a world where regulatory requirements are increasing everywhere, as explained by Dr. Jan Smeets, DSM Anti-Infectives/The Netherlands, who presented striking examples of different filing requirements worldwide.

Mrs Hélène Bruguera / EDQM presented recent experiences with the new CEP change submission guidelines. She also updated the audience on the EDQM inspection programme and mentioned that this has thus far resulted in CEPs of in total seven manufacturers and traders having been suspended, all relating to API manufacture in China and India. 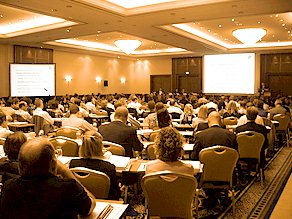 Amidst all the ongoing and coming changes to the regulatory systems the ICH programme may offer opportunities to build bridges between the systems to make them more compatible. An important, recent example is the newly proposed ICH Q10 topic on Quality Systems and its possible implications for continuous improvement. Dr. Joyce Ramsbotham, Solvay Pharmaceuticals, presented its history and the current status.

The last two lectures dealt with a topic on which the final speaker - APIC vice-president Dr. Chris Oldenhof of DSM Anti-Infectives – stated that it 'probably contained a root cause of many of the regulatory problems we are discussing at this event': Transparency and cooperation in developing regulatory documents. He concluded that also in the development of EU- & US regulations and guidelines much earlier and more extensive industry involvement is needed, as already proven by the successful ICH procedure. As presented by Ms. Dunja Schumacher of EMEA, the new EMEA Procedure provides for a first careful step into that direction.

A special feature of this year's APIC conference was the inclusion during the second conference day of parallel sessions that appeared to be highly appreciated by the participants. Each delegate could choose to attend 2 out of 8 different sessions. The sessions on 'PAT – Latest developments' and 'Impurities' attracted by far the most participants with nearly 90 attendants in each group. Other topics of high interest were the sessions about 'Vendor qualification', 'Counterfeit in the API supply chain' and 'The APIC Audit Programme'. Very specialised topics were covered with the computer-related session on 'SAP and validation', a session focussing on 'Microbial-, viral and TSE risks of biotech products' and another one covering the 'Implications of the clinical trials directive'.

In conclusion: The conference was an ideal arena for open and fruitful discussions that will hopefully result in a further increase in mutual understanding and cooperation between the authorities and the API industry and in an ever stronger basis for the harmonisation of API regulations worldwide.