Due to the Freedom of Information Act (FOI), the FDA makes their inspection results available to the public. More rarely, however, the public gets informed about inspection results of EU supervisory authorities. The U.K. Medicines & Healthcare Products Regulatory Agency (MHRA) is a positive exception from this rule. Now, the 2016 GMP inspection deficiency data trend has been published by MHRA's GMDP Inspectorate.

According to MHRA they have "improved the way of gathering the inspection deficiency data". The new data trending can now allow stakeholders to identify:

In 2016, the MHRA has inspected 242 UK manufacturers and performed 82 inspections overseas. In the top-ten list of "critical" and "major" deviations found in all inspected areas, findings regarding the quality system rank first. And there is a new number two: "Sterility Assurance", which wasn't even in the top ten in 2015 (see illustration 1). This is similar to recent FDA findings and the same number one as in the previous year. 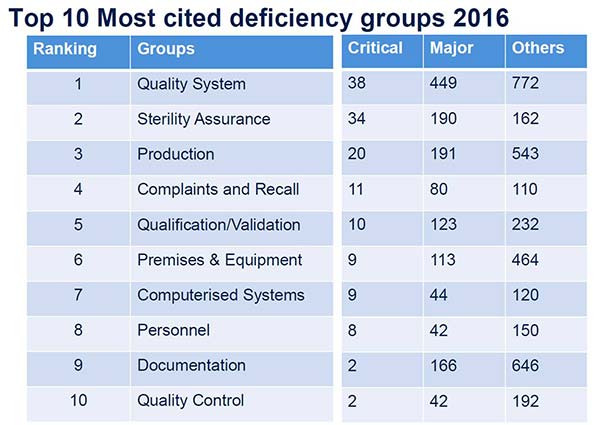 Again, a lot of observations were made in the handling of deviations and CAPA, as can be seen in the examples given in the report. But also quite a few deficiencies related to the lack of senior management oversight on effective implementation of pharmaceutical quality system (PQS) and the Product Quality Review (PQR) were made. As in the previous year, the MHRA also focuses on ensuring that updates to EU GMP were captured, reviewed and implemented.

The report lists examples for all relevant chapters and annexes of the EU GMP Guidelines, allowing stakeholders to "perform their own assessment against the deficiency findings as part of self-inspection and continuous improvement".

11/05/2022
How many FDA inspections still take place in the EU?
27/04/2022
FDA sends Warning Letter to EU Company after Remote Evaluation
16/02/2022
US Gov. Office asks FDA to improve Foreign Inspection Program
26/01/2022
FDA: Delays in Resumption of Inspections
15/12/2021
Remote Inspections: Reflections on the global Transformation of international Inspections
08/12/2021
Q&As from the EMA Webinar for Industry on Integration of EudraGMDP and OMS