Laboratory control problems are prominent in a bolus of FDA drug GMP warning letters recently issued to companies in Asia and Europe.

In mid-October, the agency posted letters it had recently issued to two active pharmaceutical ingredient (API) firms in China and Japan, respectively, to a contract testing laboratory in India and to a contract tablet and powder manufacturer in Belgium - all of which reference deficiencies in lab practice.

The four warning letters also showcase the growing emphasis FDA investigators are placing on the quality assurance linkages between the participants involved in the supply chain.

The API manufacturers receiving the letters were Hofu City, Japan-based Kyowa Hakko Kogyo and Shulan City, China-based Jilin Shulan Synthetic Pharmaceutical.   The letter went out to Kyowa in late September referencing a June inspection, and to Jilin in May addressing findings during a late-August 2009 inspection. Warning letters went out to Hyryana, India-based Choksi Laboratories and Qualiphar in Bornem, Belgium at the end of September - both referencing findings from inspections in the late April-early May timeframe. In line with FDA procedures, the four foreign warning letters were issued by the Division of Manufacturing and Product Quality (DMPQ) in the Center for Drug Evaluation and Research (CDER) Office of Compliance and signed by DMPQ Director Richard Friedman.

The prominence of laboratory control issues in the four letters reflects their overall frequency in 483s issued to foreign firms, according to recent FDA data. 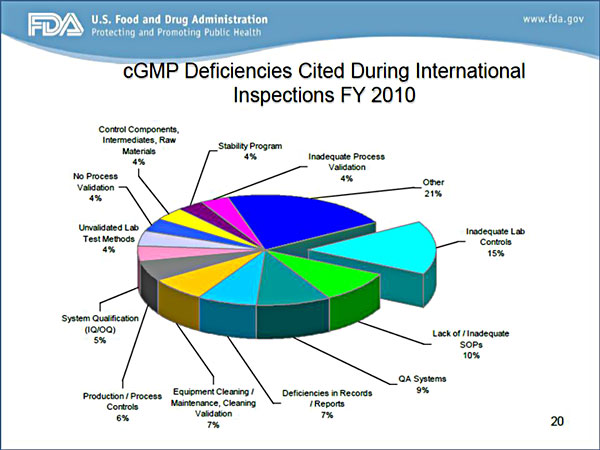 Inadequate lab controls were the top agency drug GMP citation area abroad in FY 2010 (ending September 30), making up over one in seven (15%) of all 483 listings. Lack of or inadequate SOPs was the second most frequent 483 citation internationally at 10% of the total.

Lab problems were particularly prominent in China, comprising almost one in four (23%) of the GMP deviations included in 483s issued to Chinese firms in FY 2010.  Deficiencies in buildings/facilities and in records/reports were a distant second, with 7% of the citations each.
Inadequate lab controls was a little less frequently cited area in India, running second at 9% to problems in QA systems (16%). In Europe, inadequate lab controls made up 13% of the drug GMP citations, followed by QA systems (11%) and lack of or inadequate SOPs (10%).
Industry consultant Paul Vogel, who led CDER's Division of Manufacturing and Product Quality before leaving the agency in the mid-1990s, reviewed the recent FDA foreign inspection findings at the annual Generic Pharmaceutical Association/FDA "Fall Technical Conference," in Bethesda, Maryland on October 20-21.

Vogel noted that he was not surprised that lab controls along with QC responsibilities were the leading GMP citations, as they have been among the top concerns for some time.  He was surprised, however, that SOPs were not cited more frequently in China. "The primary reason could be the difficulty posed by the language barrier to really assess the adequacy or inadequacy of the procedures and quality systems themselves," he suggested, adding that "the documentation challenge is significant in my experience" in working with Chinese firms.

Among the two API warning letters, lab issues were particularly prominent at Kyowa.

Do you want to read more?

This article is taken from the IPQ (International Pharmaceutical Quality Journal).

IPQ’s monthly format keeps subscribers "Inside the Global Regulatory Dialogue"™ where the initiatives are being defined that will reshape the landscape.  The IPQ is one of the most important Journals in the GMP and regulatory environment. In co-operation with IPQ the ECA will publish selected articles. ECA members will be able to read the complete articles in the members’ area on the ECA website. ECA Members will also be able to benefit from a special agreement with IPQ´s Editor in Chief Bill Paulson: an exclusive subscription fee for the IPQ Journal. You will find more information in the members’ area.

The full article can be read here.

To find out more about IPQ, please visit the IPQ website.