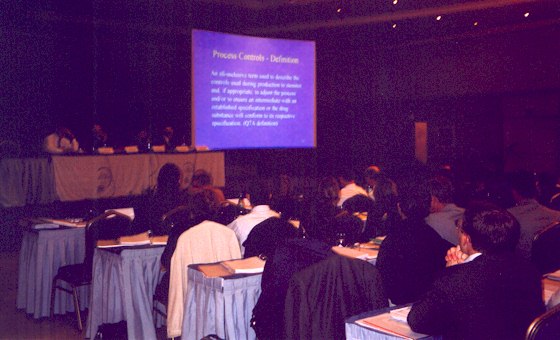 Emer Cooke from EMEA informed about the coordination of the GMP inspections through EMEA. She is Head of Inspections and in this function responsible for GMP, GLP and GCP inspections. She gave a report on the current GMP inspection activities since 1999.

One of her subjects was the current proposal for the new legislation. She emphasised that it recommends that GMP inspections of API manufacturers should be conducted on the basis of Annex 18 (ICH Q7A).According to the proposal, it is also planned that EMEA should manage a register of the results of these inspections (Certification of GMP and of Non-GMP Compliance).

As to the time frame for the implementation of the new legislation, Mrs Cooke stated that it would probably not be realised before 2005. The reason for this delay was to be found in the comprehensive revision of the European pharmaceutical legislation that is currently being made.

Afterwards, Dr Lothar Hartmann from Hoffmann-La Roche presented the new APIC Audit Programme. This programme enables API manufacturers to have a standardised GMP audit conducted by qualified auditors. It is the aim of the programme to reduce costs of audits on the one hand and to create an opportunity to have an independent GMP compliance assessment on the other hand.

Olivier Gross of the French supervisory authority informed about his experiences with inspections of traders and brokers. During the hitherto conducted inspections, the following major deviations had beenfound:

Deficiencies observed according to the ICH Guide

The third day was dedicated to new regulatory requirements. Dr Bachmannof the German Federal Institute for Drugs and Medical Devices (BfArM) informed about the planned revision of the Variations Regulation, which had been published not long ago. As next steps he listed:

She stressed the fact that FDA's new risk-based approach plays acentral role both in the CMC Review and in the GMP Initiative. FDA intends to use its resources according to the health risk; this is true of GMP inspections as well as of the CMC Review. In her summary, Dr Chiu item is among other things the revision of 21 CFR Part 210/211 as well as the reassessment of the requirements on electronic records and signatures (Part 11) as activities of the new GMP Initiative.

Corinne Pouget from EDQM gave an experience report on the inspections coordinated by EDQM (inspections of API sites holding CEPs). During the pilot phase from October 1999 to March 2000, 5 API sites in5 countries were inspected. In the second phase, beginning in April 2001, sites that are located in other countries, e.g. in Eastern Europe, China and India, and that produce various substances (excipients, TSE risk products, sterile APIs) were inspected. For 2003, about 2 inspections per month are planned.

In case you are interested in becoming an APIC member, send an e-mailto pvd@cefic.be or visit the website http://apic.cefic.org/