On 24 to 26 October 2007 APIC held its 10th European Conference on Active Pharmaceutical Ingredients. More than 200 participants from 25 countries met in Warsaw in order to discuss current and future regulatory requirements.

An important and intensively discussed subject was the traceability in the supply chain from the API manufacturer to the "end user" - in this case to the manufacturer of finished medicinal products who uses the active ingredient in the final dosage form. The task of tracing this supply chain back without gaps can be especially difficult if several distributors and/or repackers have been involved. The responsibility for this task lies with the holder of the manufacturing authorisation for the finished medicinal product, in particular with their Qualified Person, who is responsible for releasing the medicinal product to the market and ensures the qualification of the active ingredient manufacturers, including their compliance with GMP, by means of an audit programme. The EU Commission has instructed the individual inspectorates of the EU member states to check how well this self-regulation within the framework of responsibility of the manufacturers of finished medicinal products works in practice. Francois-Xavier Lery from the European Medicines Agency (EMEA) presented the results of this examination at the conference. He focused on the quality of the audit reports, the competence of the auditors, the involvement of distributors and the traceability of the active ingredient source. He concluded that a majority (no percentage given) of manufacturers is adhering rather well to the new requirements while others should still improve significantly. 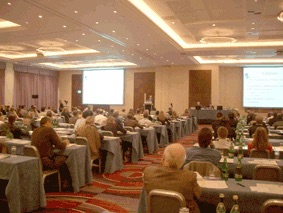 Further highlights of the conference:

1. Since January 2007, genotoxic impurities are being regulated by means of a new guideline issued by EMEA. Diana van Riet-Nales from the "National Institute for Public Health and Environment", the supervisory authority in the Netherlands, reported about the current state of the discussion and clarified the interpretation and implementation of this regulation.

2. In order to obtain a “Certificate of Suitability” (CEP), which confirms that the Ph. Eur. Monograph – often in combination with additional tests included in the CEP - is suitable controlling the quality of the active ingredient, some of the API manufacturers also have to undergo inspections co-ordinated by the European Directorate for the Quality of Medicines and Health Care (EDQM). In her presentation on EDQM’s inspection programme Hélène Bruguera highlighted the most frequent deficiencies that have been identified within the framework of such CEP inspections.

3. In the near future a revised version of the EU Variations Regulations will be issued. The intention is to harmonise the requirements and procedures throughout the EU and to reduce the administrative workload both on the part of the registration authorities and on the part of the industry. Nicolas Rossignol presented the state of play of this important initiative on behalf of the European Commission.

4. Another key topic at the conference was "Quality by Design" (QbD) or Q8 within the ICH framework. In his lecture on the status of current FDA quality initiatives Dr Moheb Nasr pointed out how both the manufacturer of APIs and the authorities may benefit from the application of QbD concepts.

5. Extensive information on the GMP situation at manufacturers of APIs in China was presented by Dr. Sun Yueping of a leading GMP Consultancy in China. The lecture included focus on current problems occurring regarding exportation of non-complaint APIs manufactured by non-licensed Chinese manufacturers (and the role of European traders in this business) and views on how to resolve these important issues.

Once more the conference offered a wealth of new information to the delegates. The high quality of the lectures given by key representatives from both industry and authorities combined with the willingness to discuss matters in all openness, resulted in this event again contributing much to a further increase in mutual understanding between the API industry and the supervisory and registration authorities. Many of the new developments reported at this conference are snapshots, so we all looking forward to what the 11th APIC Conference, to be held in Paris from 22 to 24 October 2008, will bring. (www.api-conference.org)