The GMP world was turning a bit slower in 2016 - now, it's picking up speed again. Currently, several crucial changes are being made with consequences even for national legislation. There may not be a great amount of guidelines being changed or revised at the moment, but some of the changes that are being made do have significant impact (e.g. for manufacturers of IMPs, parenterals or ATMPs).

The changes will also entail a restructuring within the EU GMP guidelines - but let us start at be beginning.

To prevent future deviations, the restructuring won't be in the form of a directive, but a regulation (the Clinical Trial Regulation = CTR), which is directly applicable without needing to be transformed into national law.

All this will come into force as soon as the EU's new submission portal for clinical trials has been implemented. A transitional period of three years will follow. However, there are some delays at the moment (probably until 2019).

Similar to the new IMP guidelines structure, advanced therapy medicinal products (ATMPs) are to be defined in separate guidelines in the future, as well. To that end, the European Commission has issued the "New Guidelines on Good Manufacturing Practice specific to Advanced Therapy Medicinal Products" on 22 November 2017. ATMP manufacturers should implement the guideline's requirements by 22 May 2018.

The aforementioned changes ultimately lead to a new structure of EU specifications. While it is difficult to describe in writing, the following diagrams show it quite clearly.

Structure of EU specifications so far: 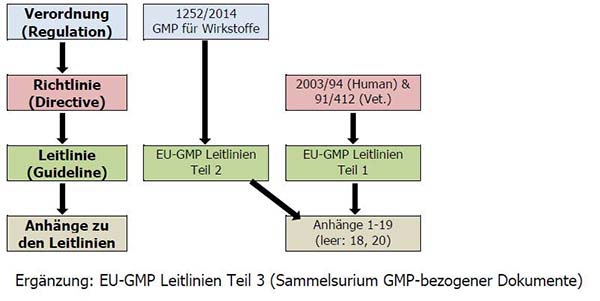 Future structure of EU GMP specifications (without GDP - they remain the same):

The long awaited draft of Annex 1 (Manufacture of Sterile Medicinal Products; Targeted stakeholders consultation) was published on 20 December 2017. What's special about it is that the revised Annex 1 won't be an independent EU document. Instead, it will also apply for the PIC/S guidelines. Even though it is still just a draft (comments can be submitted until 20 March 2018), the pharmaceutical industry will have to prepare for several changes, like:

What will become of the MRA?

The new Mutual Recognition Agreement (MRA) with the USA came into force on 01 November, 2017. Since then, the competent authorities of the EU have not conducted any inspections in the USA. In return, the FDA approved eight European authorities, so far: Croatia, France, Italy, Malta, Spain, Austria, Sweden and the United Kingdom. Other EU member states will be added as soon as their evaluation by the USA is complete; by 15 July, 2019, all authorities resp. countries are supposed to be evaluated and approved.

Challenges: the MRA is not as simple as it sounds. For example, the FDA does not perform routine inspections of IMP manufacturers. After the implementation of Delegated Regulation 2017/1569 however, IMP manufacturing in third countries is to always be inspected by national EU authorities. If and how EU authorities will inspect IMP manufacturers in the US in spite of the MRA is still not clear (the regulation has not come into force, yet, after all).

The new ICH Q12 Guideline "Technical and Regulatory Considerations for Pharmaceutical Product Lifecycle" has been published for a consultation phase (Step 2) in December 2017.

The requirements and revisions resulting from the ICH Q3 guideline have been implemented in various chapters and monographs of the European Pharmacopoeia (Ph. Eur.). These changes were published in Supplement 9.3 and apply since 01 January, 2018: