The U.K. Medicines and Healthcare Products Regulatory Agency (MHRA) has published a report summarising GDP inspection deficiency data from its 2016 inspections. The report includes results from inspections conducted by the GDP Inspectorate against the Human Medicines Regulations 2012 as amended (HMR) and the EU-GDP Guide. Data of mixed GMDP inspection was not included. However, not all of the 1428 GDP inspections were evaluated but a sample of 10% (148 selected). Only 'major' Findings were included but no 'critical' findings. The reason is, according to MHRA, that "they generally cover broader sections of the GDP guidelines and are assessed individually due to the seriousness of issues."

As with most GMP deficiency overviews, 'Quality Systems' is on top of the list. But it is followed by two typical GDP topics: 'transportation' and 'Responsible Person': 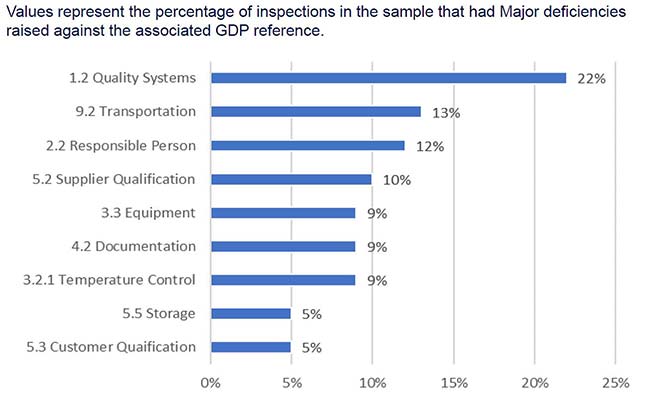 Main concerns for the role of the Responsible Person were the lack of sufficient knowledge and training and a poor fulfilment of the responsibilities. The deficiencies noted for transportation issues mainly deal with temperature control and monitoring.