The following tables show the frequency distribution of the Warning Letters of the last fiscal year 2018 (Oct. 2017 to Sept 2018) and the current (first three quarters of) fiscal year (October 2018 to June 2019) in terms of finished products, APIs and countries.

The following trends can be identified from these tables: over the past few months, the number of US-American pharmaceutical companies receiving Warning Letters has risen sharply; on the other hand, the number of Warning Letters generally sent to API companies has significantly decreased. So far, only 4 API-Warning Letters have been issued. Moreover, fewer Warning Letters were sent to medicinal product and API sites in China, Korea, Europe and the rest of the world (ROW). One exception is Indian production sites, which still frequently receive the unpopular letter of complaint from the FDA.

The most frequent GMP deficiencies in comparison

It is interesting to ask which trends can be detected regarding the violations of the cGMP basic rules described in the Warning Letters. For reasons of clarity, only the 5 most frequent deficiencies are considered in the following, which again, compares FY 2018 (Oct. 2017 to Sept. 2018) and the subsequent period Oct. 2018 to June 2019. 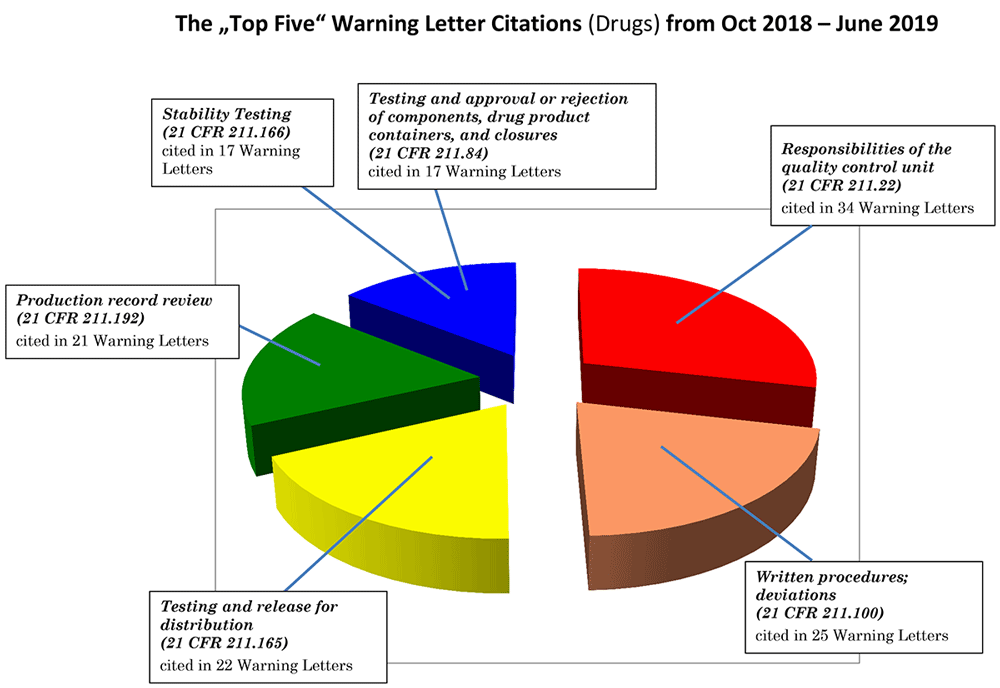 The following can be observed from the two diagrams:

The following bar chart shows the comparison in a different view: 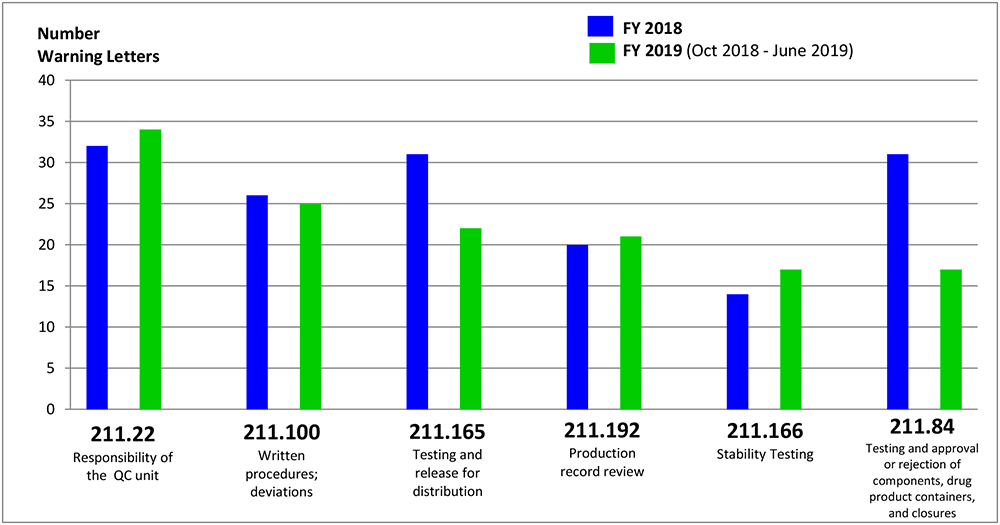 In particular, the lack of GMP-compliant documentation, such as a plan for stability testing, is reported as a deficiency related to stability testing. The following quotation is an example of the GMP violations listed in the Warning Letters:

"Your firm failed to establish and follow an adequate written testing program designed to assess the stability characteristics of drug products and to use results of such stability testing to determine appropriate storage conditions and expiration dates (21 CFR 211.166(a))."

In spite of the long-established and unchanged requirements for GMP-compliant stability testing, FDA inspectors repeatedly find deficiencies in this area, which - after receiving unsatisfactory statements from the pharmaceutical companies concerned - lead to Warning Letters. Other basic GMP requirements such as deviation management, batch testing and release, review of manufacturing documentation as well as testing and release of components and primary packaging are also permanent topics of the Warning Letters, which ultimately indicates that - in these cases - quality assurance hardly performs its task adequately. Therefore, the reference to the responsibility of the quality assurance unit as defined in CFR 211.22 is found in every second Warning Letter (34 out of 69). It remains to be seen which further trends will emerge in the Warning Letters during the remaining three months of the current fiscal year.