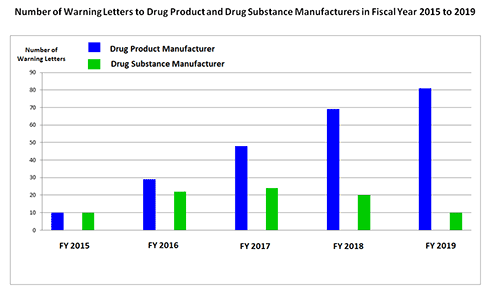 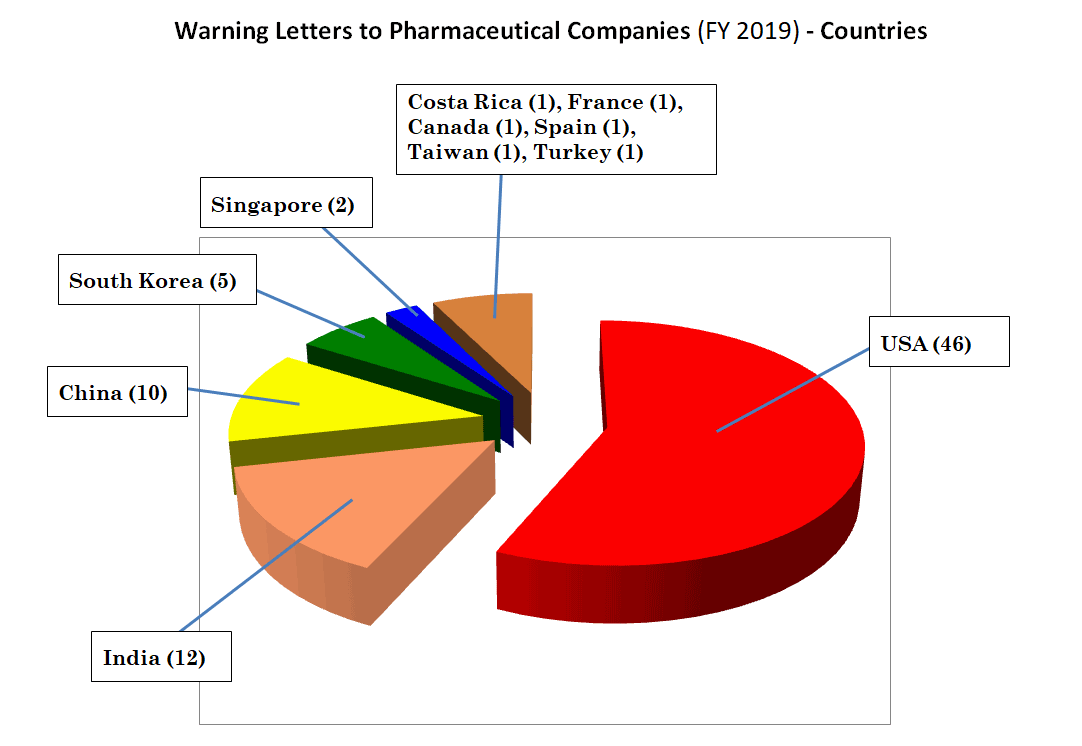 As in the previous years, the analysis of the Warning Letters' content over the last 12 months shows a similar situation: The most frequent GMP violations concern basic requirements that every pharmaceutical company should have established as a matter of course. The following chart illustrates to which chapters in the Code of Federal Regulation Part 211 the most frequently quoted deficiencies (the "Top Five") in the Warning Letters refer.

A closer look at the details described in the Warning Letters reveals a similar picture as in previous years. The following are examples of some of the quotes that refer to violations of the requirements laid down in Chapters 211.165 Testing and release for distribution and 211.166 Stability Testing:

Your firm failed to establish and document the accuracy, sensitivity, specificity, and reproducibility of its test methods (21 CFR 211.165(e)).

Your firm did not validate analytical test methods used to determine assay for the active ingredients in your drug product before release for distribution. Your notebook and high performance liquid chromatography (HPLC) report included different instrumentation parameters for the same active ingredient analysis.

Your firm failed to have, for each batch of drug product, appropriate laboratory determination of satisfactory conformance to final specifications for the drug product, including the identity and strength of each active ingredient, prior to release (21 CFR 211.165(a)).

Your firm released over-the-counter (OTC) drug products without performing any final drug product testing including, but not limited to, identity and strength of the active ingredient …

… you tested … batches of … API for … . All results were reported as passing. However, during the FDA inspection … , we requested retesting the same batches under our observation. All retest results were OOS.

Your firm failed to conduct, for each batch of drug product, appropriate laboratory testing, as necessary, required to be free of objectionable microorganisms (21 CFR 211.165(b)).

Your firm failed to establish and follow an adequate written testing program designed to assess the stability characteristics of drug products and to use results of such stability testing to determine appropriate storage conditions and expiration dates (21 CFR 211.166(a)).

Your firm failed to conduct a long-term room temperature stability study to support the expiration dates of your over-the-counter drug products.

Your firm did not have an adequate stability testing program to demonstrate that the chemical … properties of your OTC drug products remain acceptable throughout their labeled expiry period. For example, your stability testing program does not include an assay determination of the active ingredient(s) in your OTC drug products.

Final controls prior to the batch release without demonstrating compliance with the specifications are fundamental GMP violations that will certainly cause the facility to fail an FDA inspection and receive a Warning Letter. The same applies to inadequate stability studies that do not provide the shelf life of the product. These deficiencies and other GMP violations, e.g. regarding batch documentation, deviation management or testing of components and primary packaging, are the direct consequence of the failure of the quality unit. This fundamental deficiency was therefore also included in half of the Warning Letters (41). The following quotation expresses this fact concisely and accurately::

Surprisingly, the GMP deficiencies in the areas of Responsibilities of quality control unit (211.22), Written procedures/deviations (211.100), Testing and release for distribution (211.165), Production record review(211.192) and Stability testing (211.166) repeatedly appear as quotations in the Warning Letters at approximately the same relative frequency. This is shown in the following graph, which illustrates the relative frequency (in %) of the "Top Five" over the last 5 fiscal years, i.e. the period from October 2014 to September 2019: 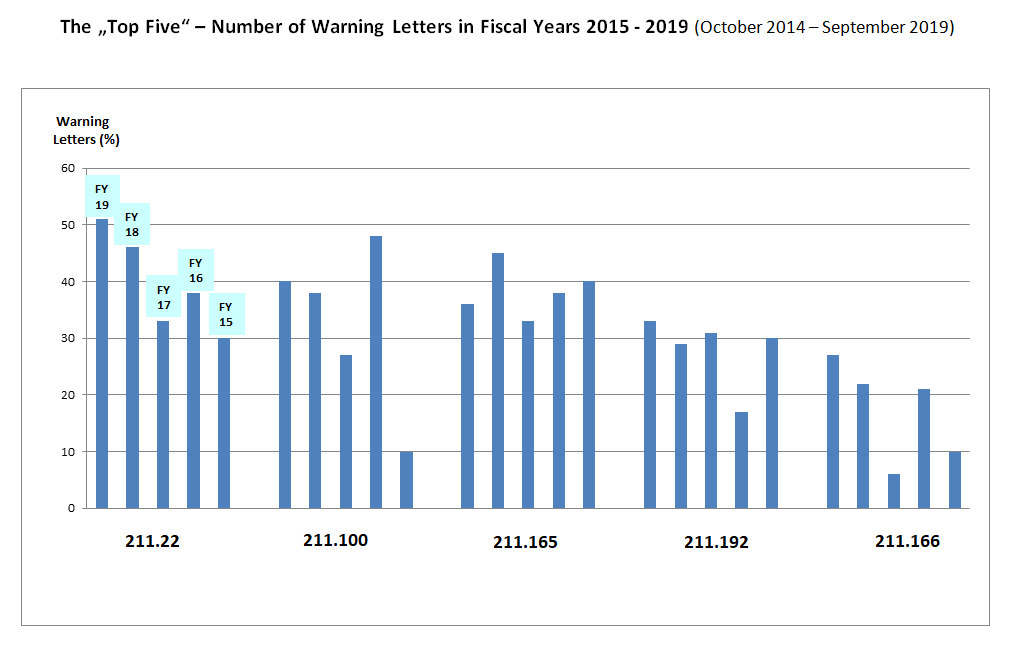 A general effect at numerous companies that are preparing for an FDA inspection is not discernible - for example in the sense of "lessons learnt" from Warning Letters which are made publicly available for many years. It remains to be seen whether these trends will continue in a similar way in the future.