Live Online Conference: GMP for Cannabis – what you need to know

All European GMP and GDP inspection authorities enter the results of inspections in this database. Certificates of GMP Compliance have been extensively entered and updated, now it's time for Non-Compliance Reports to be published. Currently, there are 85 GMP Non-Compliance Statements in the EMA database. The results are both as clear as notable: companies from India and China are - by far - the most represented. The diagram is showing  the countries where GMP non-compliant facilities have been identified. One may question how many facilities in China and India do not manufacture under GMP. Not only the number of GMP non-compliant facilities is frightening but also the GMP deviations themselves (details will follow). Beside insufficient GMP implementation, the falsification of data has been observed several times. Based on those data, manufacturers of medicinal products who import APIs from India and China have to check whether their own GMP audits have been sufficiently performed. The situation is also critical for the Qualified Person. Should a medicinal product cause any risk to patient safety (in extreme cases even death) because of  the GMP non-compliant production of an API, a court would probably verify how accurate and to what extent facilities in the Far East have been monitored. Some companies might have difficulties to prove the complete and gapless monitoring of their suppliers. At this point - if not before - several so-called "one day audits" should be critically questioned. 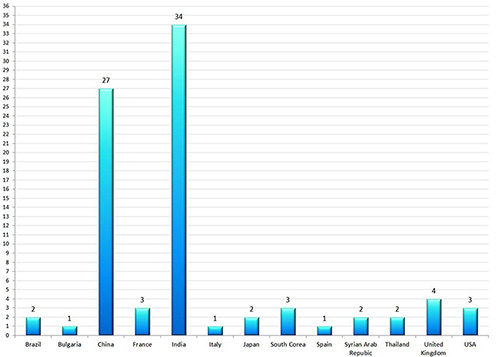 The EMA goes even far beyond the FDA; whereas FDA's Warning Letters represent (often) a last chance for companies to get rid of deviations, the Statement of Non Compliance means that the products in question are no longer marketable in the EU. So far, this information hadn't been available to the public.

Moreover, EMA's data disclose for each facility concerned the respective GMP deviation. Below please find some information about recent inspection findings: in October 2013, the French authority performed an inspection at Smruthi Organics Limited in India. There, considerable deviations were observed and the authority issued a GMP Non-Compliance Statement in the EudraGMDP. If we have a look at the deviations, there were 29 in total - among them 2 critical and 4 major ones. Critical deviation 1 concerned the manipulation and falsification of documents and data and was found in different departments. Critical deviation 2 was about corrective and preventive measures with regard to deviations identified during a past inspection which haven't been processed satisfactorily and removed.

As a consequence of the inspection performed within the EDQM inspection programme, 6 CEPs have been withdrawn. In addition, it is pointed out that another inspection already performed on 6 February 2013 had led to a Non-Compliance Statement for the company.

Besides, an API manufacturer (Suzhou No. 4 Pharmaceutical Factory in China) also got a GMP Non-Compliance Statement - in that case delivered by the Norwegian authority. The inspection outcome revealed 3 critical and 4 major deviations from the GMP regulations. The critical deviations were identified in the areas of Quality Management and Cleaning of Facilities. The major GMP deviations referred to Premises, Quality Control, and Change Control. There had already been a Non GMP Compliance Statement for this company too after an earlier inspection. After the second inspection, the EDQM decided to withdraw 3 CEPs.

Now that the EudraGMDP has been extended, it has become an essential element for the Compliance examination of facilities. It enables manufacturers of medicinal products to rapidly determine whether EU authorities have issued GMP Non Compliance for an API manufacturer.

Live Online Conference: GMP for Cannabis – what you need to know

Live Online Conference: "GMP for Cannabis – what you need to know" and "Regulatory-Post-Conference"